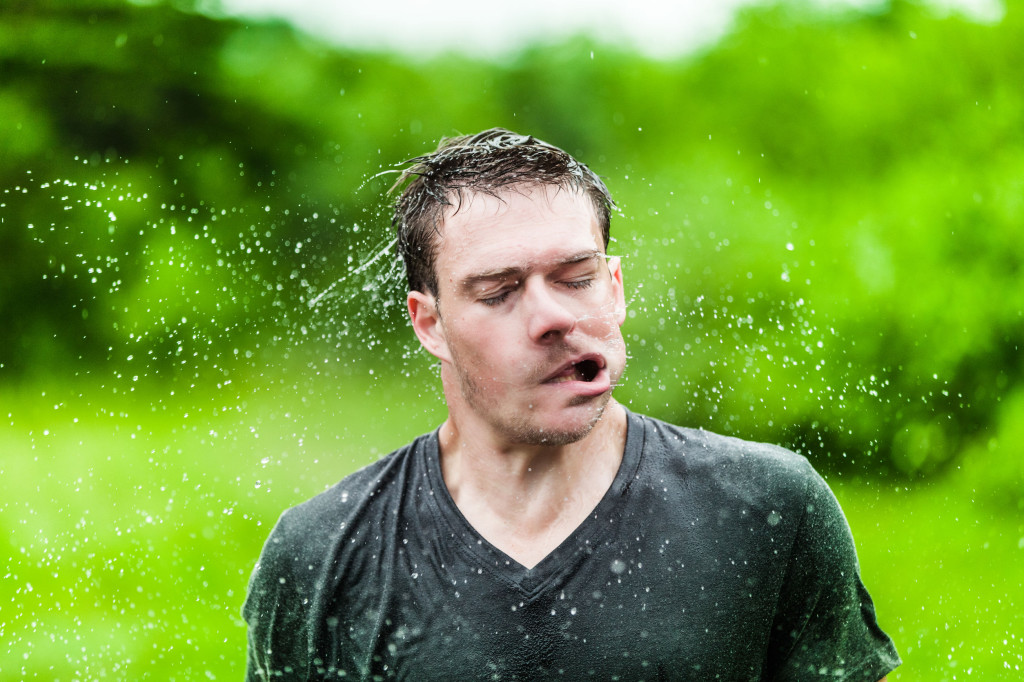 I am one of the sweatiest dudes you will ever meet.

And I guarantee I sweat much more—and much more often—than you do. If you’re about to call bullshit on me for this one, think again. I’ll outsweat you every single day, to the point you wondered why you ever even thought you were a heavy sweater. I could give Shaquille O’Neal a run for his money. I sweat if you look at me the wrong way; if I’m eating rapidly; if I’m walking one city block and it is warmer than 50 degrees Fahrenheit. I perspire if I so much as think about physical exertion; if I’m speaking in front of a crowd even when I’m not particularly nervous; if I hold hands with a girl or sit down for a first date. I balk at certain activities, on account of the knowledge that I will soak myself in my own bodily fluids; I spend much more on air conditioning fees than any human should—to the point I’m looking forward to spending my summer days at my school’s campus because the cool air is included in my tuition check; the backs of my shirts almost constantly look like a dampish Rorschach test; my taint area could grow mold if left in the dark for too long.

So yeah: I have a sweating problem. It’s called hyperhidrosis, if you’re wondering. Through the years, I’ve gone to many doctors in myriad specialties, searching for a cause to my constant perspiration and a lasting solution. These doctors have tested me for diabetes on multiple occasions (because I also urinate a lot). I’ve taken medicine designed to literally dry you out from the inside. Before I was old enough to even show negative aging, I was getting expensive Botox injectons—in my armpits. Twelve shots in each pit every few months to alleviate the sweating. It was super-painful, but it worked. (I’ve since found a better solution: in the shower, rough your pits up with a non-soaped loofah. Then rough them up afterward with a washcloth, also non-soaped. Rinse. Apply deodorant, but not antiperspirant. Trust me, it works, though I have no idea how or why. I read it in a book called Stop Sweating, Start Living. The fact that I purchased such a book should give you some sort of insight into the problem I deal with, if you think I’m exaggerating.)

My prolific perspiration has long been a source of angst and frustration for me. I realized just how much I thought about it and hated it when, at the ad school I go to, I told my Idea Presentation teacher that the number one thing I wanted to improve re: public speaking was to sweat less when I was addressing a bunch of people.

In thinking back on my answer, I decided it was high time for a change. Change that I could believe in. Change I could actually execute. I could change the way I acted and viewed my sweating, even if I couldn’t change the amount that I sweat ona  day-to-day basis. (I thought about having the serenity to accept things I can’t change and all of that stuff.)

First thing I decided was that it was astronomically important for me to embrace my flaws. Excessive sweating is a flaw, in my opinion, and though it is most definitely not my most major flaw, it is the most outwardly recognizable (probably).

So I decided that when I started to sweat, I would verbally acknowledge it immediately, possibly before the other person or persons in my vicinity took notice. My one rule in doing so was to never apologize for my sweating. It’s stupid to apologize for things that are not your fault and you should only do so once you are married.

I also purchased a number of shirts that proactively call out my sweating to wear when I’m engaging in New York City’s outdoor activities this summer. One reads “Sweat is fat crying,” and the other reads “That’s not sweat, I’m just leaking awesome.” (They are both tank tops. Because Sun’s out, guns out, amirite?!)

Second thing I did was that I took an objective look at my sweating and what it meant to other people. If they noticed, 99 out of 100 would not care at all. I’m not important enough for people to think about and chastise for pretty much anything, let alone sweating. I realized I’ve been overestimating (by a lot) the amount of f**ks people have to give about my life in general and my sweating in particular.

Would my sweating ruin my chances with a girl I went on a date with? Maybe. But I would love a sweaty girl without hesitation, and I’m not going to end up with a girl who feels any differently. If someone is vapid enough to call it over hyperhidrosis, then she’s not someone I would like anyway.

It’s all about perspective, realism, and embracing the affable art of self-deprecation.

Trump Tells WHO That U.S. Funding Will End if Changes Aren’t Made