Abbi Crutchfield is a stand-up comedian, as well as a whirlwind of tweet-based humor, living in New York. She moved from Indianapolis to the Big Apple in order to pursue her stand-up career. In the process, she found a comedic calling on Twitter, posting numerous funny tweets daily, and garnering tons of attention for her rapid-fire wit. Abbi also tours her stand-up, and performs with an all female ensemble of comedians collectively known as the Pink Collar Comedy Tour. Here’s a brief Q&A with her about life, comedy, and being funny on Twitter.

What’s the funniest thing you know about Indianapolis?

We have an amusement park called “Indiana Beach” that sits on a lake.  The mascot is a crow wearing a 1920s bathing suit.

What’s the strangest thing about living in New York?

Sometimes it’s like living in an episode of the Twilight Zone. You can get on a train and shout, “CAN ANYBODY SEE ME?!” and no one will answer. Creepy.

If not comedy, what would you be doing for a living?

That’s hard to say. I have so many, many talents. I think maybe a janitor.

You’re big on WitStream.  Why did you decide to become a “twitter” comic, and how has that helped your career?

I decided to use my Twitter account just to tell jokes to make the timeline more fun to read. As my follower-count has grown, it has increased the likelihood of getting on the radar of some of my favorite people in entertainment. I have interacted with and gotten to know some great stand-up comedians, writers, authors, actors, directors, producers, casting folks, talent reps, major publications as well as the social media staff of some of the funniest shows on television today.  Networking through Twitter has led to some great opportunities including a job at CollegeHumor, stand-up roadwork, and a comedy-writing workshop I lead at the People’s Improv Theater.

Are your tweets planned out, or spur of the moment? How much of your day is spent thinking about tweets?

I write both in advance and in the moment. I keep a notepad on me (real and electronic) for ideas throughout the day, so maybe a conservative estimate is 25 hours a day are spent thinking about jokes. Wait—that’s silly. 35.

What do you love about stand-up and improv?

What I love about both art forms is getting to choose what I am going to say and how I am going to dress. I should have been a feral child.

What’s the worst heckle you’ve ever had to deal with?

I don’t generally get criticism about what I could do better, but sometimes people will add content because they have read the silent prayer in my eyes for help. I don’t even have to look at a person for it to happen. I’ll just wish, “Please SOMEone say SOMEthing — ANYthing before I get to this punch line so that these people don’t have to laugh!” and boom, right in the middle of my sentence they will shout something unintelligible that annoys the audience, interrupts the flow, and I hug myself.

Can you describe your Pink Collar Comedy Tour in 140 characters or less?

Four great comedians for the price of fun!

What’s your favorite, or the most shared tweet you’ve written thus far?

“There are no words.”—early review of my book I haven’t started.

In a perfect world, where would Abbi Crutchfield be in the next few years?

Alive. This will be really sad if I die this year. But seriously folks, don’t drink and drive. 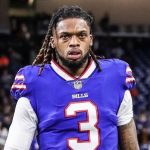 To Avoid Falls, Check Your Balance