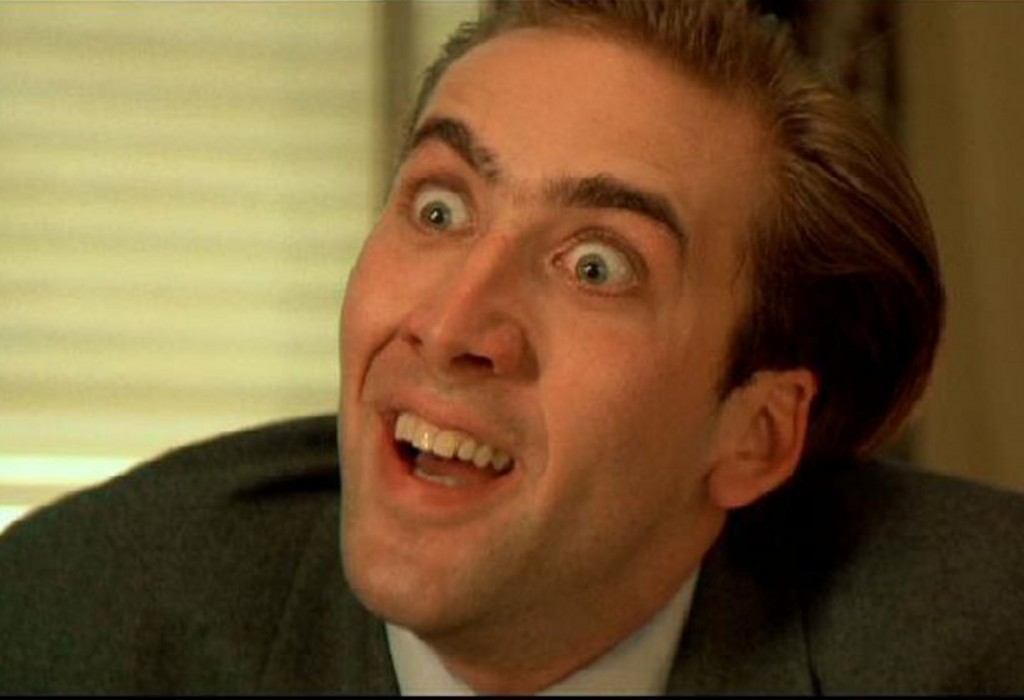 Few actors have as illustrious a career as Nicolas Cage. He’s won an Oscar, he’s worked with everyone from David Lynch, to Ridley Scott, to Spike Jonze. Not only that, he is also part of the Coppola dynasty, which is basically cinematic royalty. But one other fact goes in hand-in-hand with his prestige: no other actor can lose their sh*t quite like Nicolas Cage. When he decides to go Full Cage, it is a sight to behold. He can be zany and frenetic, seemingly coked out of his mind, or just plain go-for-broke, burn-down-the-motel crazy.

Because watching Nic Cage going bat-sh*t crazy is so satisfying, I’ve decided to corral my favorite roles in which Cage let his freak-out flag fly.

Vampire’s Kiss (1989)
This strange ’80s flick is nothing if not a showpiece for Cage. He portrays a literary agent who is clearly losing his mind. You can call this a self-indulgent piece of oddness, but when Cage starts acting wacky, I’m pinned to my seat. In this film, he scares his therapist, attacks his secretary and runs through the streets at night raving that he’s a vampire. In fact, here’s nine hours of said scene.

Deadfall (1993)
Don’t be fooled by this promising name, this film is an utter abomination. In fact the only saving grace is Nic Cage’s performance. Sure, he’s wearing a ridiculous wig. Sure, his performance is so over-the-top, it regularly dips into comic absurdity. Sure, his accent is a warbled smarm that never quite lands. But then he freaks out and all is forgiven. You don’t need to know what this film is about. Con men? James Coburn playing twin brothers? Cage getting rage-y and going Full Cage in the ’90s. Done.

Face/Off (1997)
So, in the ’90s John Travolta and Nic Cage made a movie in which they switch faces, because in ’97 that was possible. One’s a criminal, the other’s a federal agent or something, and switching faces is how the Feds planned to stop a bomb. It’s made by John Woo, so the action sequences are top-notch. But that’s not why this face-switching film made the list. It’s here because Nic Cage loses his sh*t again, and it’s terrif. I mean, I’d probably get the bends if I switched faces with Travolta too.

Leaving Las Vegas (1995)
Yes, he nabbed an Academy Award for his portrayal of a suicidal alcoholic in this provocative romance and I’ll be the first to say he deserves it. His performance is vulnerable and tragic in a starkly American way. The film is also punctuated with signature Cage freakouts that drive home the whole melodrama. Jittery incoherent conversations with hotel front desk attendants? Check. Desperate crawls to the fridge for booze in the middle of the night? Check. Knocking over casino tables in a furious rage? Check. This one features Full Cage and could serve as a public service announcement for alcoholism.

The Wicker Man (2006)
Like the song goes, I went and saved the best for last. No unintentional comedy can hold a candle to this unintentional comedy. Cage plays a cop in search of his daughter on a mysterious island populated with eerie neo-pagans. In the process, he gets in fistfights with a few women, dons a bear suit and gets covered in bees. This film simply takes the cake when it comes to Cage-ness.

Oh, and if you haven’t seen this montage of Cage losing his mind to the Requiem for a Dream score, you are in for a treat.

An Allergist Offers His Expert Advice for a Sneeze-Free Spring

While many Americans are ready to celebrate the end of winter, those with seasonal allergies are... more»