If you get off on the sensation of hellfire scorching your mouth, throat and inner organs, and you’re not frightened of the Scoville Scale, which is a measure of the burning potency of chili peppers and hot sauces, then we have a blistering treat for you. These mad concoctions could burn a hole though your stomach, leak out onto the ground, and still have enough potency to bore a cavern into the center of the Earth.

This isn’t a list for the timid, although we’ve included a few hot sauces that might not kill you, provided you have a cast iron gastrointestinal tract. If you suffer from a sensitive digestive system, enjoy reading what’s on offer here, but never partake. If you love a punishing heat, try and get your hands on one of these toxic brews and get your burn on.

The first entry on our list, and the hottest consumable liquid fuel you’ll ever come across, is Blair’s 6am Reserve. This hot sauce is very limited, and very expensive. With some batches clocking in at 16 million Scoville unites, this red-hot condiment is a red-hot item with collectors. Since less than 1,000 bottles were ever produced, be prepared to shell out hundreds of dollars for just one bottle of this taste bud killer.

Mad Dog 44 is a searing assault on your senses. You can pick up a bottle of this molten lava for under 50 bucks — but don’t let the relatively low price for this exotic pepper extract fool you. This is one kickass hot sauce, coming from unadulterated Oleoresin Capsicum, which is the stuff they use in defensive and riot control pepper spray.

If you’re brave enough to drink the Devil’s blood, which is guaranteed to be fiery hot, you should get your hands on some Satan’s Blood Hot Sauce. Coming in at around 800,000 Scoville units, this is a fierce potion that will spice up any meal with only a few drops, and make Beelzebub himself proud of his hot sauce namesake.

While the heat in Belize might not be as boiling as it is in Hell, it’s still pretty damn hot. Marie Sharp’s Belizean Heat is no exception to that fact. This hot sauce, as the name would suggest, is brewed in Belize. It a blistering combination of heat and flavor (carrots, Creole spices, garlic, onion) that the locals love, as well as many an international habanero enthusiast who pours this fierce condiment onto his or her food.

If you’ve ever made a serpent angry and ready to strike, you’ve probably sweated a lake through your clothing while in fear for your life. A bit of Vicious Viper Hot Sauce tossed over your favorite food is a great way to recreate that sweat-inducing experience. This very affordable hot sauce, which is a blend of habanero extract with hints of banana, guava, papaya, mustard and tomato, does more than simply burn through your mouth and gums. Thanks to the amalgam of flavors infused into this “snake juice,” it actually tastes pretty good too.

With 234,000 Scoville units worth of firepower, Da’ Bomb Ground Zero is a serious weapon in the hot sauce wars, and should be poured with the utmost of care. Even thought it isn’t the hottest concoction on our list, this seemingly flammable hot sauce will still bring a cascade of tears to your eyes with its habanero, chipotle and lime juice combination.

The dead tell no tales, and apparently are immune to the burn of Blair’s After Death Sauce as well. The usual culprits, like cayenne, chipotle, cilantro and habanero are employed in the creation of this otherworldly hot sauce. It’s exceptionally scrumptious, but near lethal as far a kick and overall burn are concerned. The heat will linger in your mouth and throat long after the food has vanished from your plate.

Compared to the other hot sauces blazing through our list, Tabasco Brand Chipotle Pepper Sauce is a walk in the park. That doesn’t mean it’s mild by any stretch of the imagination, but if you’re not a world-class consumer of fiery chills, this might a product you can actually handle. It’s a smoky tasting, red jalapeño based recipe that offers up a hefty does of heat, along with great flavor, without killing anyone off who happens to go in for a bit of blaze, but can’t stand an excessive amount of heat.

All You Can Eat: A Buffet Primer For Real Men 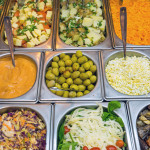 >Do not come to a buffet lightly. more»

Only about half of all American adults meet the national guidelines for aerobic activity and only... more»