New research shows that snoring is not the sole domain of men.

“We found that although no difference in snoring intensity was found between genders, women tend to underreport the fact that they snore and to underestimate the loudness of their snoring,” said lead investigator Dr. Nimrod Maimon. He is head of internal medicine at Soroka University Medical Center in Be’er Sheva, Israel.

“Women reported snoring less often and described it as milder,” Maimon said in a news release from the American Academy of Sleep Medicine.

The study included more than 1,900 people, average age 49, who were referred to a sleep disorders center.

Snoring was found in 88% of the women, but only 72% reported that they snore. Both rates were about 93% in men in the study group.

Among people who snored, the average maximum loudness was 50 decibels among women and 51.7 decibels among men. While 49% of the women had severe/very severe snoring, only 40% rated their snoring at this level, the researchers found.

The study authors noted that there is a social stigma associated with snoring among women, so women may not be truthful when asked about snoring. More troubling, this may contribute to the underdiagnosis of obstructive sleep apnea in women.

Snoring is a common warning sign for obstructive sleep apnea, in which the upper airway repeatedly collapses during sleep. Left untreated, sleep apnea can lead to high blood pressure, stroke, heart disease and other health issues.

“The fact that women reported snoring less often and described it as milder may be one of the barriers preventing women from reaching sleep clinics for a sleep study,” Maimon said.

When screening women for obstructive sleep apnea, health care providers should consider other factors in addition to self-reported snoring, he suggested.

For example, women with sleep apnea may be more likely than men to report other symptoms, such as daytime fatigue or tiredness.

The study was published online recently in the Journal of Clinical Sleep Medicine.

The American Academy of Otolaryngology–Head and Neck Surgery has more on snoring and sleep apnea.

For an Energizing Workout, Take It Outside 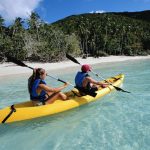 As the weather starts to warm up, you might be excited to restart a swimming routine, but swimming... more»

Can Apps Make Your Kids Smarter?

Smartphones, tablets and laptops are everywhere, and young children are fascinated by them. Now,... more»