Vaping is gaining a foothold in an unlikely population: New research shows a growing number of cancer patients are using electronic cigarettes.

“The gradual but steady increase is quite striking,” said study author Dr. Nina Sanford, an assistant professor of radiation oncology at UT Southwestern Medical Center in Dallas. “The high prevalence of e-cigarette use among younger cancer patients and survivors is concerning.”

Use of conventional cigarettes by cancer patients remained stable between 2014 and 2017, according to Sanford.

There is little known about e-cigarette use among cancer patients, she added.

“Because e-cigarettes are relatively new, we don’t have the long-term data on their side effects yet,” Sanford said in a medical center news release.

It’s known that conventional cigarettes can impair healing from surgery and radiation therapy, so it’s possible that e-cigarettes may cause similar problems, she noted.

Sanford said patients often ask about e-cigarettes, and she advises them to avoid all kinds of smoking or vaping.

“I don’t encourage it, but I also am honest that the jury is still out on what the long-term effects of e-cigarette use are,” Sanford said. “These are not an FDA [U.S. Food and Drug Administration]-regulated product. There’s wide variation of what goes into them. When you pick up an e-cig in the store, you really don’t know what’s in it.”

“It’s a new area, and there’s just no long-term data on e-cig use so there’s going to be a lot of controversy on what to do until more rigorous studies are published, particularly given the diverse entities involved, ranging from cancer organizations to e-cigarette companies,” Sanford said.

The study was published recently in the journal JAMA Oncology.

The U.S. National Institute on Drug Abuse has more about e-cigarettes. 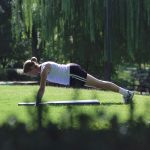 Are you in a time crunch for even a short workout? Experts at the American College of Sports... more»

Unscrambling the Egg Data: One a Day Looks OK

Go ahead and crack that egg. Eating one a day isn’t likely to increase your risk of heart... more»