Though they often dread social events, many introverts find they’re not as bad as feared and some have learned to fake an outgoing personality to get through the experience.

In the business world, socializing is a key to success, said Erik Helzer, who led a team that examined the psychological implications for both introverts and extroverts. Helzer is an assistant professor of management and organization at the Johns Hopkins Carey Business School in Baltimore.

“We’re told, ‘You ought to do this. It will help your career,'” he said in a university news release. “But that doesn’t mean we look forward to it. In fact, many people do not.”

For the study, Helzer and colleagues asked 146 university students to spend 30 minutes interacting with strangers in a cocktail party environment.

Many predicted the experience would be mentally draining and that they would feel worse, not better, after socializing. Not surprisingly, this was especially true for more introverted participants.

Overall, 40 percent of all participants predicted they would feel worse after socializing, but instead felt significantly better about it after it was over.

Researchers also had participants rate each other’s social skills. Overall, extroverts were considered more socially skilled than introverts, but that gap was much smaller for introverts who feared a negative evaluation.

That suggests that they compensated for their shyness by “acting” extroverted, said Helzer.

“Their fear of negative evaluation may be fueling a desire to overcompensate in order to make a positive impression on their interaction partners,” he said.

Helzer said the takeaway is this: “More often than not, these interactions will go more positively than most people expect.”

The study was recently published in the journal PLOS One.

The American Psychological Association has more on personality.

(HealthDay News) — For the 27th day in a row, the rolling seven-day average for daily new... more»

Kid-Friendly Food Swaps Everyone Will Love 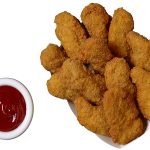 Is the dinner table a battleground at your house? Getting your kids to eat better doesn’t... more»