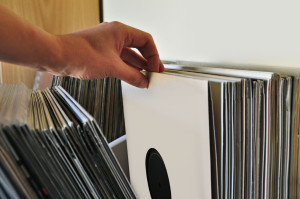 I listen to records.

If you told me four years ago that I would one day utter, exclaim, or inscribe the previous sentence, I’d have called you a name and done that thing where I hit the top of your beer bottle with the bottom of mine. (Thus causing your beer to foam up and out of your bottle and onto your pants, in case you are not from the Midwest and, thus, versed in the methodology.)

I thought listening to records was the domain of the worst of the worst, the most hipster of the hipster, the most pretentious, obnoxious, annoying humans in the world. I mean, why in a fiddler’s fart would I want to go backward in time; why would I want to listen to something that makes things sound bad when I had all of my music on a handy (and small) machine that can play all of it at the touch of a button?

But then my great-aunt Marian died.

Marian had a remarkably significant impact on my young life, especially for someone not really related to me. Oh, I should probably mention: she wasn’t even my real great-aunt. She was a woman about my grandmother’s age who had become, by dint of her role as my mother’s third-grade teacher in Wichita, KS, a part of the family because she was always around. Of course, that didn’t mean we liked her any less. In fact, it probably meant we liked her more. Choose your family and all that.

Anyway, Aunt* Marian was an integral part of my childhood existence. She was my first piano teacher. She bought books for me. (Until then, I’d thought books existed only in libraries.) On our birthdays, she gave each of my brothers and me the exact number of dollars that corresponded to the age we were turning.

*For the sake of brevity

About the time I was turning 25, Marian’s body and mind began to crumble under the weight of old age. She stopped socializing. She wouldn’t come to the Thanksgiving dinners she had previously never missed. She complained constantly. She became the opposite of a joyous light in my family’s collective life.

My mother was charged by Marian, who had no children, to be the executor of her estate. When Marian’s health began to fail badly and it was clear that she was not long for this world, my mother got a jump-start on putting Marian’s affairs in order. My mother assumed that this would be a relatively routine job; a few small investments to manage, one-half of a duplex to take care of. She was wrong.

My mother soon discovered that my great-aunt Marian, who’d always seemed outwardly to be a frugal soul living well within the means provided to her by a teacher’s pension, was in debt. Like, a lot in debt. A lot in credit-card debt, as it turned out. I’ll spare you the numbers, but it was significant. Enough that our view of Marian – or at least mine – soured. Not because Marian was in debt, but because Marian was too incapacitated to do anything about that debt, and it was now my mother’s responsibility. And my mom had enough to do without unraveling her former third-grade teacher’s financial affairs.

Marian died not long after my mother’s discovery about her personal and financial affairs. The funeral was sad– because it was a funeral — but sadder still because there were exactly four people who accompanied the hearse to the gravesite in Winfield, KS: the preacher, my mother, my father, and me. All standing on a hill on a weirdly mild winter day, watching the internment of a woman whose best years we could only vaguely remember.

At the time of her death, Marian’s possessions could be classified in four categories: piano-related, book-related, perfume-related, and cat-related. There was the piano itself, long out of tune. About half a thousand harlequin romance novels. More empty perfume bottles than my parents and I could count. And a whole bunch of kitty litter.

Defying this easy categorization was her record player – an old Magnavox portable that, when folded up, looks like a suitcase. When it is opened, the top becomes the speaker; the contents of the suitcase are the player itself.

It was, by far, and with all due respect to Marian’s eight-decade life, the most interesting thing she owned. Nonetheless, I didn’t have any great lust for the thing. I took it from my grandmother’s garage, where Marian’s few possessions went for distribution, mostly because I thought it might look interesting in my house in Kansas City, where I lived at the time. Then, one lonely night in my living room, I put on one of the five records I’d inherited with the player.

My appreciation for the act of listening to records wasn’t “sudden,” so it would be inaccurate for me to say that “suddenly, it all made sense.” Instead, it was more like, “Subtly, and slowly, it began to make sense.”

Pretty soon, I was buying records, carting them around, talking about them. Rumours, Madman Across the Water, and Damn the Torpedoes: these were the ones that hit the player most often.

What I couldn’t figure out was why. I mean, I was still the guy who thought record-listeners were the worst; how come I was now telling people that listening to records was so great?

To back my claims, I searched for evidence that record sound is better than its digital counterpart. I learned that there is all manner of debate on this: some people say that records, because they’re analog, don’t cut off certain segments of the audible range. Thus, the warmer, richer tones that records produce. Others say that such talk is bulls**t.

I suspect that much of what I think is “better” sound is perception-based—that I am old enough to think that music shouldn’t sound completely clean and crisp.

I also suspect that the real reason I find records so worthwhile has nothing to do with their sound.

I like records because they’re clumsy and inefficient, not in spite of that fact.

Contrast that procedure with that I employ when I hold my iPod in my hand. A few clicks and I am given access to everything.

This everything is, in fact, too much.

A record player is thrift, frugality, an omelet you make yourself.

When we can have everything we want, we don’t appreciate what we get.

It is fitting, I suppose, that it took the death of someone about whom I once cared deeply to thrust a record player into my life. Records are death, in their way – a reminder that time is passing while you get up to put on Adrenalize (which sounds fantastic on the Magnavox, by the way).

Our MP3 players, on the other hand: these are everlasting life.

I guess there are those who prefer everlasting life. (Certain vampires, Ponce de Leon.)

But give me death any day, because death reminds us to live.

Just like the records I now willingly, gleefully, and proudly listen to.

“I live in Washington state,” said the caller, “but my husband is on a plane to... more»

Smokers who recently quit tobacco cigarettes are much more likely to use e-cigarettes than those... more»