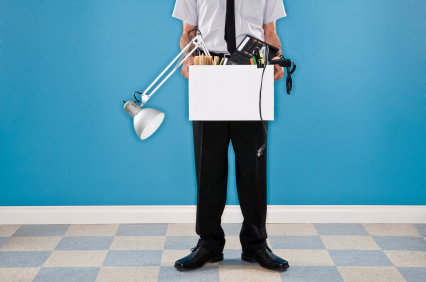 Most of us have experienced the sting of being fired. It’s painful and humiliating and after they’ve taken your dignity and your parking pass, it seems as if the whole world is ending. But that couldn’t be more wrong. People go on to do exceptional things after getting fired all the time… and maybe you’ve heard of some of them. Consider this as inspiration wrapped in pop-culture factoids. Here are some celebs who got the boot and went on to… you know, become celebs.

Snoop Dogg
When Snoop was only a young pup working at a local grocery store in South Central LA, he managed to get himself fired for shoplifting. Thankfully he has mad skills with the mic and became a hip-hop pioneer. “I was better at stealing the groceries than I was at bagging them,” the rapper said.

Hugh Jackman
Although it’s hard to believe, before the Aussie was cast as the iconic Wolverine, he was a cashier at a 7-11. Apparently he was far too chatty with the shoppers, which led to his dismissal. “I got fired after six weeks because the [boss] said I talked too much to the customers,” Jackman told Us Weekly.

Madonna
Prior to becoming a music icon, then-struggle singer Madonna Louise Ciccone was always taking on odd jobs to help her survive in New York. In fact, for a while she worked at the Dunkin Donuts in Times Square, but she was fired after she squirted donut jelly on a customer.

Oprah
Yep, even the beloved media mogul once fell on hard times. At age 22, Oprah was fired from her co-anchor job for the 6 o’clock news at Baltimore’s WJZ-T V. Of course, not long after that she met Gayle King, who would soon become her producer on her extremely successful daytime show.

Bill Hader
Before Hader was stealing scenes on “SNL,” he was working random jobs to make ends meet. For a short time he worked at a movie theater. His departure was… abrupt. “A sorority group rented out the movie theater. They were rude to me so I told them the end of Titanic,” the comedian said.

Rain Wilson
Long before the world discovered Dwight Schrute, Wilson was just a lowly new college graduate trying to find his way. One of his first jobs was working as an event coordinator for a charity for the disabled. His boss apparently didn’t find his quips amusing. “My boss said, ‘I need someone who when I say jump, he says how high.’ I said, ‘I had no idea people actually said that.’ He let me go.”

Staying calm during the coronavirus pandemic isn’t easy, but a few simple steps will help you... more»

(HealthDay News) — Swimmer’s ear is an infection of the outer ear that is caused by... more»