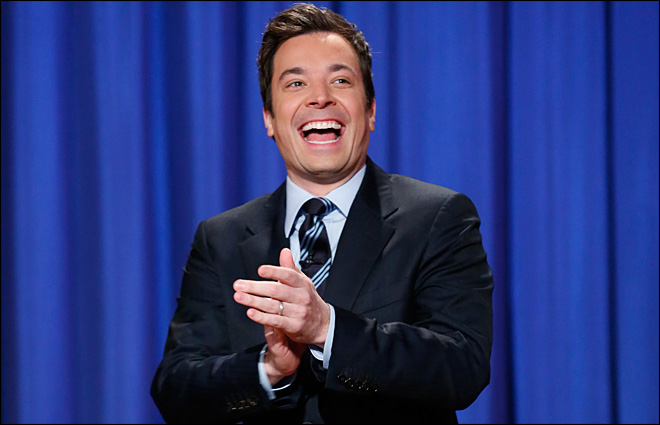 It’s very early in the tenure of Jimmy Fallon and Seth Meyers as the respective hosts of NBC’s Tonight Show and Late Night, but I’m confident the network has (for once) made some great programming decisions. Decisions I anticipate will have much more staying power than the whole Conan O’Brien and Jay Leno debacle, when the shows became an angry and unsuccessful game of musical chairs and terrible ratings.

Don’t mistake this for me saying that the first weeks of the show have been completely out-of-control awesome, because they really haven’t. Which is to be expected. I still remember watching Fallon deliver the monologue his first night as host on Late Night a few years ago and being very alarmed at his perceived inability to keep it together. But he has since become a great host of late night television, and I suspect Meyers will find a similar comfort zone as he progresses. (Or at least I hope so. His first few monologues have been straight up uncomfortable, but having to deliver a monologue on a nightly basis has got to be one of the most difficult gigs in show business.)

The thing is, neither Fallon nor Meyers have had to deliver out-of-control awesome shows in their first weeks on air. They had to do only one thing: be better than Jay Leno.

This is not a tall order, really. But still—they’ve both nailed it.

My perception since I became interested in surfing the late night shows (i.e. old enough to stay up and view them) was that Leno had been mailing it in, or that he and his staff just weren’t that great. He would elicit laughs sometimes, but he was always just douchey enough to seem unlikable.

Also, Leno is old. I don’t mean old in the elderly sense, but old in the way he and his show runners commanded Tonight Show when they were at the helm. The vast majority of people I know—people who will end up as the main viewership for the Tonight Show and Late Night for the next couple of decades or so—consume the show in memorable snippets that hit the Internet the morning after the show airs. People simply do not watch these shows live as often as they used to, and Leno’s crew never adapted to that. I can’t name one memorable sketch or bit from Leno’s show in the past two years that has gone at all viral, while Fallon (and to a lesser extent, Jimmy Kimmel) and his staff execute at least two or three bits a week that become immediately viral and drastically enhance the show’s outreach.

Furthermore, celebrities seem to love Fallon and Meyers, and want to come onto their show to do all kinds of whacky stuff. The stuff that people want to see and, maybe even more importantly, share. Fallon is especially adept at getting away from the traditional one-on-one desk and chair interview that late night shows have been built around for…well, forever, and instead convincing celebrities to do things like an epic lip sync battle or the performance of a song with The Roots and traditional classroom instruments.

I don’t think NBC executives knew what in the hell they were doing in 2010 when they ousted O’Brien in favor of bringing Leno back, but it seems like now they have it together, that they understand what is going to make a late night show successful in the coming years.

It’s also exciting that we probably won’t have to see a host walking around the street in a Canadian Tuxedo, lisping at people about stupid things that aren’t even that funny to our parents.

Blood Count May Offer Clues to Treatment of COVID-19: Study

The severity of COVID-19 illness may be influenced by what researchers call “cytokine... more»