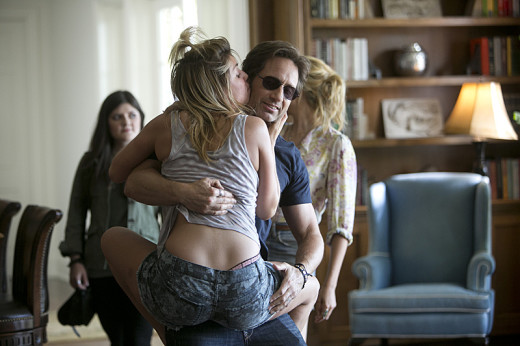 The summer after my freshman year of college, I was flipping through the channels at my parents’ house one night when I saw a trailer for a new Showtime Original Series called Californication. It starred David Duchovny as a drunken novelist who has sex with many women after his relationship with his pseudo-wife crumbles. It seemed interesting.

I watched the pilot on premiere night and was immediately hooked. I had long loved Duchovny — I was Agent Fox Mulder from X-Files for Halloween in the fourth grade — and the character he played, Hank Moody, was hilarious and witty in a pretty abrasive way that I found completely entertaining and endearing.

The first season of the show is and probably always will be one of my favorite television seasons. And this is saying something, because I generally watch all of  TV (except for reality TV).

In the seven years since, I’ve watched every episode of the series, some of them many more times than once. I’ve diligently followed the will they/won’t they dynamic of Hank and Karen’s relationship, coupled with Hank’s unfathomable proclivity to f**k things up with his penis and his general behavior.

When the series finale aired at the end of June, I cried a little bit.*

It wasn’t like how I cried at the end of, say, LOST or The Office, two shows I wept for because they were brilliant, inspirational, and coming to an end. I acknowledge without hesitation that Californication went on much longer than it should have, and that the plot was repetitive and played-out. I wasn’t super sad to see the show end, because it was past time for it to, but I was very sad to see the character Hank Moody go.

Why was I so sad about this?

Because Hank Moody is quite possibly my favorite television character of all time.**

Well, probably the foremost reason is that I liked to live vicariously through Hank and his exploits. At certain points, I believe I’ve emulated Hank Moody. I used to wear a ring on my index finger, and I’d be lying if I said the show wasn’t a big influence on my penchant and adoration for drinking copious amounts of scotch, neat. Like show creator and writer Tom Kapinos, Hank was a vein for fantasy fulfillment for me. I’ve always wanted to be a successful writer who gets to have sex with a bunch of women and split his time between California and New York City. I’ve always wanted a razor-sharp wit even one-third of what Moody put out nearly every time he opened his mouth, and I have always, always wanted an epic love story that defines a major part of my life. But above all else, I’ve always sought to cultivate an attitude where I don’t care what other people think of me, and where I have no qualms with earnestly speaking my mind.

As it is, I am or have none of these things, though I still have that ring.

Duchovny’s character taught me a little bit about the possibility of achieving any and/or all of them. Hank Moody gave me hope, odd as that may sound, given that he isn’t a real person. But he is a fake person who could exist, and he is at least a fictional person whose talents and characteristics are not impossible or even all that far-fetched. Kapinos took pieces of different personalities and psyches and put them together into one idealized television character.

I, like most people, watch television to escape momentarily from the trials and mundane parts of the world that I live in. But I’m pragmatic in my escapist fantasies. I’ve always been drawn to comic books, superhero storylines, and fantastical stuff like Dr. Who, Lost, and even Once Upon A Time, but I value more highly (sometimes) the stories where I can see a bit of myself in one of the characters, or I can empathize with one of the story lines (As a kid, I used to spend hours at a time pretending that I was Chandler Bing from Friends). Complete fantasy is a high art when created, but so are stories based in realism.

I really respect this sort of reachable fantasy. And I’d like to think that I can adopt and take forth some of Hank’s better traits.

I’m just going to miss spending a few Sundays a year with him.

If you haven’t seen Californication, I urge you to watch at least the first season. You won’t be disappointed.

*This isn’t uncommon for me. I cry during most series finales.

**The only runners up are Mulder, Seth Cohen from The O.C., and Schmidt from New Girl.

Coping With Budget Stress During the Pandemic

The coronavirus pandemic has supercharged the financial stress that already plagues many Americans,... more»

Health Tip: Exercise Can Be a Brain-Booster

Restful Romance: Smelling Your Lover’s Shirt Can Help You Sleep

Bedtime without your partner on Valentine’s Day could make sleep elusive. But a new study... more»