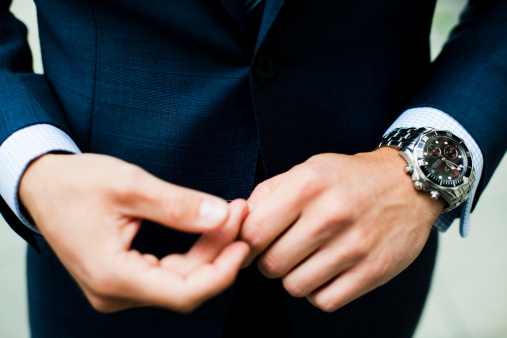 Sometimes the clothes make the man, and sometime the man makes the clothes. Well, technically, man physically always makes the clothes, but you know what I mean. When it comes to watches, some folks just don’t give a hoot what type of timekeeping device you have wrapped around your wrist. If you run in other circles, where power and money are appreciated and sought after, your choice of watch (and how much it costs) says a lot about the type of fella you are — or at least aspire to be.

Sure, you can shell out a ton of green for a pricey Rolex or Omega. If you have the extra cash strewn about, why not? No need to give it to the poor in order to help them to afford something to eat (tongue firmly planted in cheek). Watches mean a lot to a lot of people.

For the rest of us mere mortals who don’t want to spend 20,000 or 100,000 dollars on a “timeless” wristwatch, here are eight very manly and stylish watches that the average Joe can probably afford with just one or two pay checks — or maybe a half a dozen or so, depending on his income level.

The word “masculine” is right there in the name of this Calvin Klein timepiece. You really can’t do much better than that. Falling in the $300 range, this analogue chronograph quartz watch is one of the least expensive chronometers on our list. This Calvin Klein offering will let you show off some very functional jewelry on your wrist, while laying claim to a brand name that doesn’t force you to break the bank in order to do so.

Keeping things in the same relative price range, you could opt for the Bulova Men’s 96A108 Stainless Steel and Brown Leather Automatic Mechanical Watch. This tastefully designed timekeeper shouldn’t cost you more than a few hundred dollars. In addition to its striking appearance, this watch makes use of an automatic self-winding movement, powered by the natural monition of your wrist and arm. This means you’ll never have to bother with a clock battery again — as long as you’re not a couch potato or in a coma.

Another watch that’s still very inexpensive for what you get is the Citizen Men’s BL5250-02L Titanium Eco-Drive Watch, which comes with a stylish brown leather band. One of the most amazing things about this smartly crafted timepiece is that it has the ability to convert any type of light into energy, which should keep your battery charged for many, many years — provided you don’t live in a dank and dark place, like Northern Finland, or the Batcave. (Batman has his own specially designed Batwatch, I’d bet.)

If you’re after some Swiss perfection, and are willing to spend a little more bank, why not go for the Alpina 4? This Swiss company took the classic design of the Alpina 3 (circa 1930s) and updated it for the modern age. The beautifully crafted Alpina 4 is also exceeding sporty. It features antimagnetic, anti-shock, stainless steel and water-resistant technology. Of course, you’ll have to pay a little more for this perfection, reaching up into the $3,000 range.

Staying with the Swiss theme (those yodeling entrepreneurs do know how to make a good watch), the 88 Rue du Rhone collections offer sophistication and the much sought after “Swiss” name for around $400 -$800 dollars. With a fairly wide selection of 88 Rue du Rhone styles to choose from, this is an excellent watch for those of you who just have to go “Swiss,” but don’t have a fat Swiss bank account to back up your purchase.

The Anstread Oceanis, which is part of this American watchmaker’s Navel Combat Series, is a fine looking timepiece that can be had for well under a thousand dollars. According to the company’s website, the Oceanis offers “a balance of design and function… created to work for professionals. Inspired by the rigors of naval service, this series incorporates the needs of surface warfare, aviation, submarine service, and special warfare.” So basically, if you’re wearing this watch, you’re ready to head into bloody battle. How’s that for a badass, macho, yet strikingly elegant-looking watch?

Omega’s Seamaster Planet Ocean “James Bond-inspired” Chronometer doesn’t have to tout its “tough guy” credentials. If James Bond wears the fricking thing, that should be good enough for you. You’ll be happy to know that Daniel Craig (aka James Bond) has worn several different versions of this co-axial Omega Series in the 007 films. You can take one of these scratch-resistant, water-resistant, sapphire crystal-boasting watches home for around six or seven thousand dollars.

Now that we’ve come to the TAG Heuer Monaco, we’re really talking about a line of famous, macho timekeeping art. Steve McQueen, the quintessential icon of manliness, made this watch famous in the 1970 film, ‘Le Mans.’ Within it’s square face, this timepiece is instantly recognizable. Different models of the Monaco Series vary in prices, but if you’d like to own one of these “belt-driven transmission” babies, be prepared to spend anywhere from $3,000 to $10,000.  Hey, no one said it would be inexpensive to look like (your wrist, at least) Steve McQueen. 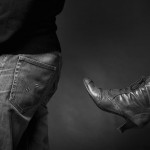 Sometimes you need a swift kick in the butt. more» 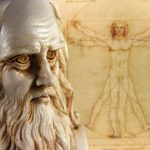 A fainting-related fall that caused nerve damage in his right hand could explain why Leonardo da... more»