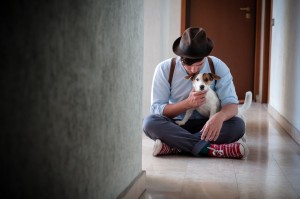 There I am hanging at a pop-up event for my barber friend Matt’s men’s grooming product line Civil Grooming. Matt’s a handsome, tatted gent, who by all (of my) accounts is the epitome of cool. He tried out for Killswitch Engage, can wield a straight razor like a boss, AND used the line “I love your hair. I’d love to cut it sometime” on a complete stranger (she’s now his long-time girlfriend). Unlike Matt, I am very clearly uncool. It’s fine, I accept it, in some ways I even embrace it.

The event is at Dick & Jane’s, a small, semi-speakeasy with killer cocktails and a penchant for Tiger Beer (it’s from Singapore!). It’s the type of place that you’d use to impress a visiting friend. The event featured solid tunes (can’t go wrong with Japanese surf-rock), sweatshirts from Dip-Sters (sweatshirts are cool now???), and at least three people were wearing vests. Sufficed to say, it was a hip event.

It’s early, so we pony up to the bar. There’s a gorgeous Asian woman next to me. In my search for a coat hook under the bar, she kindly offers hers. I immediately think she’s into me, and then disregard it because this is generally what I think when women are nice to me. One drink in Paul informs me he’s hungry. So we tell Matt we’ll be back and pop out for a bite.

Upon our return, the bar is full. The music is playing at that loudness that’s just slightly louder than it needs to be. Where you don’t really notice it, but every once in a while you think “Man I wish they’d cut the volume down just a smidge.” The place is filled with hip people. Not hipsters, but the type of people that would be in a Levi’s commercial (GO FORTH). A guy with a bright green knit cap, long brown hair, red and black plaid flannel, and black jeans — by all accounts grunge were it not for what appeared to be eyeliner; another guy, similarly dressed (his flannel was navy); a heavyset guy who’s wearing a Carhartt jacket but clearly not in construction/repair/a farmer; and finally, a thin small Asian man with a bowl cut, wearing black pants, a wool knit scarf, wool knit sweater, and round, black-rimmed glasses. I sh*t you not he looked like Edna from The Incredibles (if you don’t get that reference, here).

It was later that Paul perfectly classified this unique group of people: Post-hipster. No ironic t-shirts, no PBRs, no skinny jeans. Instead, indistinct-and-yet-unique fashion, and Tiger Beer. These people are beyond hipsters. They’re beyond cool. They probably have some word that they use for “cool” that I’ll never know or understand. But they’re also really socially awkward.

Example: Green Hat sees his friend Carhartt. He’s so happy that he practically runs up to the friend and hugs him almost to the point of making out. And I don’t mean that in a homophobic “Oh he’s kissing and hugging a dude” kind of way, I’m saying he was almost nuzzling his friend (clearly just his friend).

Example: Edna comes up to Green Hat and feeds him water. In a very motherly fashion. Green Hat, after drinking said water, sees the beer in Edna’s other hand and takes a sip. After which point Edna feeds him more water (again in a motherly fashion). He then hugs Carhartt and the water splashes everywhere on the guy’s jacket. Neither notice (Carhartt – made to handle whatever bar mishap occurs).

Paul and I find a spot at the perimeter of the bar, and commence to brooding. Me, nursing a beer (a Tiger Beer…of course), he a ginger ale. We don’t mingle, we don’t chit chat. We’re just two bearded dudes hanging out in a place where we feel incredibly out of place. God I feel old. I glance over, and notice Gorgeous Asian Woman still at the bar. She glances over. Wait, what? She definitely just looked at me. “Paul,” I say, “she definitely just looked at me.” Thoughts of her being into me creep back into my mind. Clearly they’re unsubstantiated. I mean, people look at people all the time. Yeah, she also smiled, but that dude she’s with probably told her something incredibly funny. Screw that guy. He’s so awesome. Hold the phone, she looked again. This is real. This is really real. She’s walking over here! I, Patrick Fischer, made a girl walk over to say “Hi, I saw you from across the bar and I think you’re hot and I want to do things of a sexual nature to you.” I. Am. The. Man. Here she is.

“Hi, I am an ambassador for Tiger Beer. I was wondering if I could ask you two a few questions….”

It is during the market research I’m providing to Gorgeous Asian Woman that I figure it out. I know what it is that is making us feel out of place. There’s a college just up the street. A liberal arts college. These are just art school kids.

Paul and I split. In saying goodbye, I have my final act of uncool. I go in for daps (ya know, the thing where you slap hands and interlock them, generally followed by one-armed hug), but Matt goes full hug. I’m not expecting it, so to recover my ‘dap’ arm hugs his ribs. Then in saying goodbye to his girlfriend, I start going for the cheek kiss, realize I don’t really know her well enough for that, and redirect for standard hug. But now my balance is off and I use the hug to stabilize myself, making it much more intense than the usual “Hey I kinda know you, Goodbye” hug. I’m an idiot. We leave.

Turns out a lot of people seem really cool, when most of the time that’s just informed by the situation. Other people are just cool through and through. But I, on the other hand, am painfully uncool. Always and forever. *Awkward hug*

*Not-so-subtle reference to the new Against Me! album, which is fantastic. Go listen to it now.

Summer Style: What’s up With the Short-Sleeve Shirt? 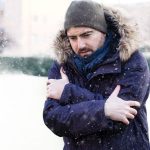 Minus 29 Fahrenheit in Fargo, minus 28 in Minneapolis, minus 13 in Des Moines. With potential... more»

If you can tackle a tough workout, that may bode well for your longevity, new research suggests. A... more»