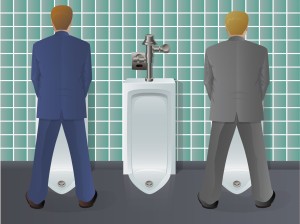 To my knowledge, I pee more than any other human being I have met in the past 26 years. Like, to a worrisome degree. I’ve been tested for diabetes multiple times due to the fact I pee and sweat like, well, a person with diabetes.

At work the other day—just for kicks—I decided to tally the number of times I went to the bathroom to urinate in an eight-hour period. The total? Eighteen.

You can’t beat that. In fact, you probably can’t even fathom that.

Spending as much time as I have in restrooms of all manner and ilk, I have become a pseudo-expert on the proper etiquette to maintain whilst in the commode to ensure people are having as pleasant an experience as possible.

Here are a few tips to help you along the way to helping your fellow man.

1. If you find yourself approaching a row of urinals that men are posted up sporadically against, avoid standing directly next to another man, unless almost all spots are taken and you are unable to do so. This may seem ridiculous to you, and it is, but some dudes are weirded out when others stand directly next to them to take a leak when other urinal stalls are open. Dudes like their space. There’s no plausible reason to crowd the urinal vibe if it’s not absolutely necessary.

2. Avoid the wandering eyes. Even public restrooms are more or less private places, and they should stay that way. I’m sure that on some level we have all felt curiosity about how another man’s penis compares to ours. That’s just human nature (maybe). But don’t look. Keep your eyes either forward or looking directly down at your own junk. Everybody will feel more comfortable that way. The man next to you won’t be weirded out by your sidelong glances, and you won’t have to see a girthy thing that puts yours to shame.

3. Do not speak unless spoken to, especially if the room is full of strangers. It’s one thing to exchange dialogue with a good friend, but another entirely to stike up some banter with a stranger who is just trying to shake twice, grab some hand sanitizer, and get the hell out of there. Just do your business in (verbal) silence, and get back to what you were doing before you had to go to the restroom. (This rule does not apply in restrooms at sporting events. For some reason, the morale is high and friendly in these places. It’s even acceptable to make fun of people who are rooting for the opposing team.)

4. If you find yourself as the only occupant of a restroom, and you are in a stall, announce yourself when another guy arrives. Just make some sort of noticeable noise that is DEFINITELY not talking. This way he will be less likely to start belting out some Kelly Clarkson or whatever. This will save you both from an awkward moment when you emerge from the stall.

5. Take your time. You always have time to go to the bathroom. It’s an essential human thing. Dig it. I’m not saying you should linger in there forever, but don’t rush. People rushing in restrooms is how they end up with water and soap splashed everywhere and discarded sheets of toilet paper strewn all over the ground.

6. Clean up after yourself. If you’re the one guilty of flailing your arms about and spraying soapy water everywhere during the handwashing process, grab a paper towel and mop that shit up. If you’re in a stall and were too lazy to put the seat up and you dribble on it, wipe that off too! (It wont’ be clean, per se, but ignorance is bliss.)

7. Don’t be that guy who is too lazy to put the seat up, and as such pisses all over it.

8. Minimize the flatulent noise you’re making, if possible. When you’re at home, it’s all good to let your freak flag fly. But when in public, refrain from ripping off the 10-second farts that nobody else wants to hear. Poop with dignity, man. (This rule also comes in handy if you are in an office bathroom that doesn’t have much of a buffer to the office beyond a simple door. People can often hear farts through that door. Trust me.) 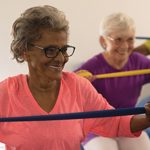 Am I A Hipster? A Critical Analysis 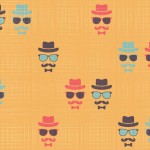 The doctor is in. Today, he's self-diagnosing a bad case of "the hipsters," more» 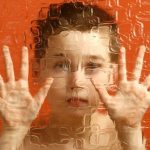