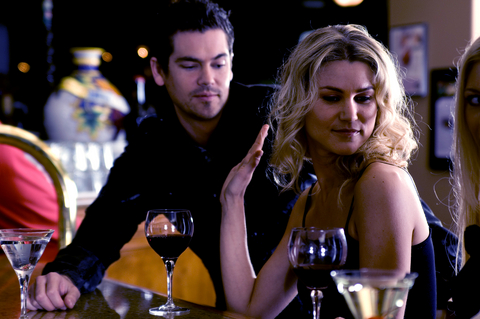 My gender (the dude gender), despite what most of us might say in mixed company, often likes to think we’re God’s gift to women. Even an atheist, who might like to preen a bit, could very well give thanks to the Almighty above on occasion for his charm and good looks.

While not wanting to dive into the traits that make a man attractive to the opposite sex, and what might make him a real turn off, I’ve had enough conversations with fellow males to know that a lot of us believe we can pull women that are obviously way out of our league.

Nowhere is this more evident than with flight attendants and women working in bars. Just take a look at the films we watch where the guy hooks up with female flight attendant for a quickie in the bathroom. Not that it’s never happened, but considering the stress and cramped nature of the job — and also since I’ve talked about this with a friend who’s a flight attendant (admittedly not a comprehensive survey) at some length — it doesn’t happen nearly as often as some men would like to pretend that it does.

As far as that exquisite goddess working behind the counter at your favorite bar goes? Sure, we’ve all come across that gal who likes to go home with a different bloke every night, but as a general rule, female bartenders have heard every possible line that any hominid — from an adult male to an ape capable of sign language — could possibly hurl their way.

Yeah, she might by smiling and laughing at your jokes, and even flirting a bit, but chances are she’s doing that because it’s a part of her job. Fantasize all you like, and even brag to your friends about how that gorgeous mademoiselle behind the bar is making love to you with her eyes. If you think you can beat out the hundreds of other guys chatting her up on a nightly basis, good luck. Who knows? Maybe you’ll be that one fortunate fella who can actually sneak past her bullshit radar and score a hit. There’s always hope.

And while we’re at it, nurses are a hard sell too. First off, they’re not as impressed with your junk as you are. They’ve seen a lot of body parts over the course of their careers, and probably quite a few bits that are probably more attractive than whatever you’re sporting beneath your clothes. So that means you have to work off of pure charm alone. Hard to do when your nurse just watched someone change your bedpan.

I’m talking about hitting on nurses while you’re in the hospital here. The same goes for a bar hostess working in her bar, or a flight attendant on a plane. Now if you happen to run into some of these women while they’re not practicing their respective professions, there might be a brighter romantic future for you yet. Context is everything when it comes to going after the seemingly unattainable. And of course, as we’ve already established, you are God’s gift to women, after all.

So if you want a challenge, or you’re the kind of man who models his life after what he sees on film (or some Casanova he happens to know), go ahead, chase the nurses and flight attendants of the world. Just be aware of the high probability of spectacular — and oftentimes entertaining for those around you — failure.

Could Yoga Calm Your A-Fib? Early Findings Suggest It Might

People with the heart-rhythm disorder known as atrial fibrillation, or a-fib, may ease their... more»

A Tasty and Nutritious Way to Prepare Fish

Want to get more fish in your diet with a lot more flavor? This two-step technique yields a crispy... more»