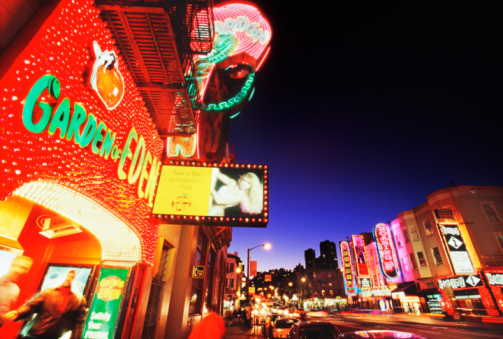 Years ago I held my bachelor party in Vegas and because it was a bachelor party we all went to Olympic Gardens, the mecca of all strip clubs. And of course, since I was the bachelor, all my buddies paid for my lap dances. (And if that’s not reason enough to get married then I don’t know what is.) During one particular lap dance an overly aggressive stripper sat on me, unbuttoned my shirt and purred,

Immediately, I thought she wanted to have sex with me. IMMEDIATELY. That is, until she finished her lap dance, slid on to my best friend who was right next to me, opened up his shirt and purred,

And just like that a reality-arrow pierced my delusional bubble and the harsh truth of life washed over me as I learned the cold, hard fact that strippers really don’t like you.

It is the job of a professional stripper to make you think they like you. (Yes, there are amateur strippers – just go to Mardi Gras.) If you think that they like you then they are doing their job properly and probably deserve a raise or at least free dental. A stripper is pretending to like you to get more money from you, as well she should. If the tables were turned and you wore a G-string, body glitter, and smelled like vanilla for an eight-hour shift wouldn’t you want to make as much paper as possible?

You are not funny, charming, endearing or special to a stripper in any shape, way or form. She is being nice to you because that is how she earns her living. You are not that one guy who is different. You may think that you are and it is the job of the stripper to make you think you are. That is why strip clubs are so popular; the hope of having hot women think you are “the one.” There is absolutely nothing wrong with that, but there is absolutely nothing more than that.

Also, any friend who says that strippers love him, that he has a way with strippers and that he “mos def” has had sex with a stripper is a straight up liar, liar, pants on fire. That never happens. It is a dream wrapped in an illusion and then crammed into a fantasy. A stripper will never have sex with you if she actually meets you at her place of business. (Years ago, Chris Rock put out a comedy song where he sings that there is no sex in the champagne room; so if you can’t believe me then at least believe him.) She is a woman who is paid to take her clothes off, not a whore. The only way you will have sex with a stripper is if you randomly meet a girl on J Date, take her out for coffee, meet her parents, go see her perform at a spoken word open mic, finally find out she is a stripper, and THEN have sex with her. And if that does happen to you consider yourself charmed and marry that girl immediately.

This is not to say that strippers are cold-blooded love assassins. I am sure there are plenty of them out there who are super cool and nice. They are just using that super coolness and niceness to their advantage in order to make money to live. (Or to pay for veterinary school – a cliché I have always loved.) But don’t think for one second that they remember a thing about you after they hop off of your lap. I remember everything about that stripper at my bachelor party but I can guarantee that in her mind I am just an amalgam of every idiot she has danced for.

Okay, that is way sadder.

Sense of smell most often diminishes by the third day of infection with the new coronavirus, and... more»